It would be nice to say I’ve been walking on water but enjoyable as the Stations book launch has been I (nor we) didn’t quite do that (well nearly)! No, but the Stations Book Express has certainly been steaming through the London Overground at a great pace and to be honest I’ve barely been holding on, Cherry Potts (editor at http://arachnepress.com/) stokes the engine so!

But I have done my bit to get up a head of steam at Clapham, at Shoreditch (http://shoreditchradio.co.uk/) and at Rotherhithe, shovelling extracts from my story Inspector Bucket Takes the Train with all the energy I could muster. Now, though,  I must climb out of the carriage and catch the train back to the frozen north. 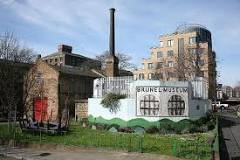 But what a delight  the Brunel Museum in Rotherhithe was: the readings, of course, with the lovely Stations authors, and the quaint (and unexpected) Turkish cafe with its charming hostess, and then the plunge into the shaft of the Rotherhithe tunnel itself, the entrance to what was once seen as the eighth wonder of the world (at least according to the museum guide, Robert Hulse). And we were amongst the first visitors the place had had for over 140 years! (To the air shaft I mean, not the museum!)

Of course all we can see right now is the doomy shaft itself, its echoing walls covered with the soot of thousands of steam train journeys, some in solid flakes like black crustaceans, its drab concrete floor (stopping us from tumbling onto the railway lines underneath us), huge bolted pipes and the outline of the wooden staircase that would have once led the Victorian visitor down to what essentially became an underwater shopping mall.  in 1843 the idea of walking under the water, with who knows how many tonnes of the Thames only a few feet above the ceiling, must have been, as our guide pointed out, “like walking on the moon”.

The Brunels, father and son, were the first to successfully tunnel underneath a navigable river and developed the technique for all river and, I presume, channel tunneling that followed – and that we take so much for granted as we nip under the water on the Eurostar. Robert Hulse, the museum guide, pointed out, with almost ghoulish delight, that we were standing on the spot where six men died as the tunnel flooded and the men drowned in river sewage. One man who did survive was Marc Brunel’s son, Isambard Kingdom Brunel. (How the history of engineering might have turned on that event. No Leviathan, Great Western Railway or Clifton Suspension Bridge then!) 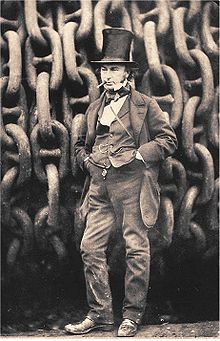 ‘But what has all this to do with the contexts of writing?’ I hear myself ask. Well, Charles Dickens must surely have passed through the same shaft that I stood in for one thing!  In ‘Household Words‘, one of the many periodicals that Dickens founded and edited, the writer (perhaps Dickens himself) describes his sense of awe when:

“crossing the Thames by means of The Rotherhithe Tunnel… gasping for a breath of vital air… (feeling) a cold shudder run through (him)  as (he)  heard the drip of oozing water.”

Dickens, like Brunel the younger, was born in Portsmouth and admired the work of his  contemporary, citing the “great works of Brunel, Babbage and Stephenson” (again in ‘Household Words’) and telling us that “Mr Brunel is not a man whom we can afford to lose.” (We nearly did!)  It is perhaps Dickens too who describes Brunel’s Leviathan as “the floating marvel of the age”.

The tunnel was originally designed as a commercial proposition to create revenue by offering a route across the congested Thames for cargo traffic – but after the tunnel was dug there was no money left to build the shafts with the spiral ramps that horses and carts would use to ascend and descend. Instead the tunnels became a tourist attraction, a place where you walked under the water to the shops located in each of the cross-tunnel arches (as seen in the picture at the head of this blog) to buy and to be entertained.  Apparently on the opening day 50,000 people walked through paying a penny each and bought souvenirs from the shops in the arches to show how brave they were for shopping under water. Soon, however, it became a favoured haunt for prostitutes, and visitors found they could buy rather more than a souvenir.

As it happens, I have Polly Meakin, a character from my novel ‘Inspector Bucket and the Beast’ visiting Rotherhithe (though not, unfortunately, the tunnel.)

Bucket thinks that she may have been an accomplice of the Beast in his attempts to entrap young girls, but she insists she didn’t know who or what the Beast was and only helped him because she was desperate.

“The Bobbies shifted us on from Hyde Park as soon as they saw us. It’s always, ‘Move on! Move on!’, they said, but they never tells you where to move on to, does they? We went to Rotherhithe in the end, to try to get some factory work, soap boiling or candle making or some such. No hands wanted, we was told.”

If I had known about the Rotherhithe shaft and tunnel then (and of course I should have done!) I would certainly have used it in my novel, if not for Polly Meakin than perhaps the Beast himself. In another scene from the book I show Inspector Bucket searching the secret areas of a so-called Gentlemen’s club where prostitution and all manner of nefarious activities are going on. Perhaps I might have had the Beast frequenting the alcoves of the Rotherhithe tunnel as well as this ‘Hell Club’.

“There were alcoves, and in each one a lascivious act was framed.  In front of this series of alcoves the voyeurs promenaded, sometimes pausing to view their favourite scene. No one accorded us attention as we passed along; nobody seemed to mind us nor be ashamed to be seen. Indeed, it was as if they were out for their Sunday stroll! Some of the voyeurs were serious in demeanour, as if they were connoisseurs of some fine art or sculpture, pointing out some special feature of the action displayed for them or commenting, without lewdness, on some item of physique. Some were laughing. Some sights were almost pretty. But most were cruel.”

Although there are plans afoot to reopen the shaft itself as a major entertainment attraction (there are already concerts and other entertainments held there) for the moment the only glimpse we can get of the tunnel is at the weekend when the tunnel’s lights are on, and if you alight at Wapping you can look back and see the lit panoply of what was once one of the marvels of the age.